Showing posts from March, 2019
Show All 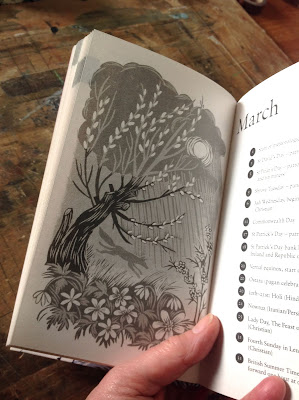 "In like a lion and out like a lamb" The old saying proved true this year, March began with storms Freya and Gareth, in SW Suffolk we didn't get much rain but the wind was harsh and continuous for two weeks interrupted by occasional short sharp hail showers. The spring flowers that had begun to open in February's false-spring held off until this last week of the month now that warmth and sunshine has arrived with the Spring Equinox.  I'm continuing my posts about the illustrations I did last summer for Lia Leendertz's 2019 edition of  The Almanac - a seasonal guide   ... a book which nudges us to be aware of the natural seasons.   The inspiration for the opening illustration for  March  came from my local walk along the Stour Brook that I wrote about in January , the Blackthorn is just coming into bloom as are the 'Pussy Willow' catkins. On the grassy banks the Wood Anemone flowers are like patches of stars in the grass. A squally shower sends t
Post a Comment
Read more
More posts