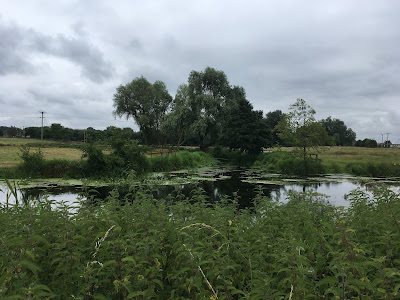 ... from Brandon to Lakenheath
After a gloriously hot summer's day on Friday it was cooler and cloudy on Saturday so we decided it was good weather for a walk. One of our favourite areas to walk is along the Little Ouse on the Norfolk-Suffolk border on the edge of Breckland. We studied the map and decided to start at Brandon and walk along the riverside footpath to Lakenheath railway station ... on Saturday afternoon there is a train that would take us back to Brandon station ... just the one train, but we would have about two and a half hours to walk about four and half miles so what could go wrong? The Little Ouse just west of Brandon opposite a 'lode' where goods used to be loaded.
4.5 miles in theory! we walked 6 miles Saturday 6 July 2019Weather: 18˚C, overcast with light rain showersStarting from Brandon stone car park, ending at Lakenheath station.


It was raining when we parked or car in Brandon station car park, so we ate our sandwiches while we waited for the shower…
2 comments
Read more 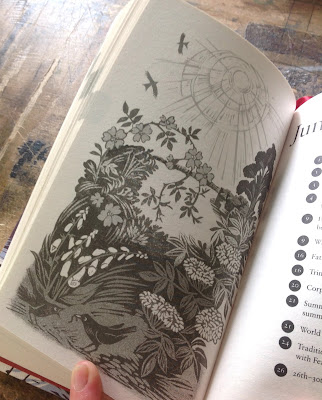 Summer rain June ... mid-summer or the start of summer? As a gardener in East Anglia I think of it as the end of any risk of frost and time to plant out tender plants. Last year we were experiencing a extremely heat and drought, the grass already burnt to a frazzle, by contrast this year June has been a month of extremes ... heavy rain, windy and cloudy days and the occasional perfect summer's day.


The opening illustration is of midday on a warm day in June ... maybe Midsummer Day when the sun at noon is at it's highest in the sky in the Northern hemisphere. Red Kites, now a common sight on my local walks on the Suffolk/Cambridgeshire border, ride the thermals high in the sky. In the shade of a hedgerow where wild Dog-Roses and Elderflowers fill the air with their perfume,…
1 comment
Read more 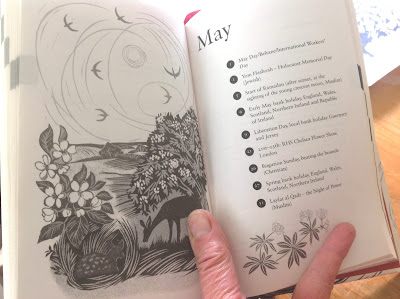 One Swallow doesn't make a Summer We've reached May and the fifth blogpost about the illustrations I did last summer for Lia Leendertz's 2019 edition of The Almanac - a seasonal guide... when out for walks this month I've been looking out deer and swallows to photograph for this blog, without success; so with the month of May drawing to a close I'll have to do without them.


The opening spread is of a glorious sunny late morning in May. in the illustration the Apple trees are in full blossom and the 'May' ... Hawthorn blossom has transformed the hedgerows to a frothy creaminess. Swallows newly arrived from Africa are enthusiastically wheeling around the sky. In the shadows of the hedge a newly born fawn has been left safely by its mother who is grazing the fresh grass nearby.


Here's my workings for the linocut for this spread ... and as this is a warts and all account, you can spot the deliberate mistake! Yes, I got my Elder muddled up with my May bloss…
Post a Comment
Read more 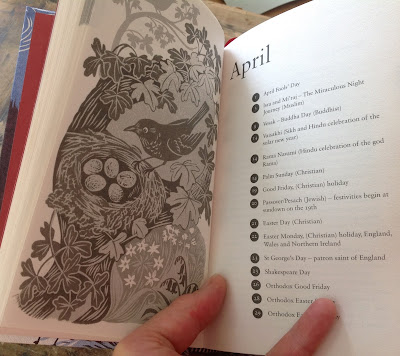 Spring flowers but no April showers I'm continuing my posts about the illustrations I did last summer for Lia Leendertz's 2019 edition of The Almanac - a seasonal guide... it's great to know that the book is encouraging people to look for and enjoy the seasonal changes in their gardens and the countryside.

Here in the south-west corner of Suffolk there has been no rain since early March and in the past week with the temperatures around 23˙C it feels more like mid-summer than spring.

The opening page of the April chapter in The Almanac is a close-up of a Blackbirds nest.
We have blackbirds nesting in and around our garden, this year they have been very secretive about exactly where the nest is, I think that the young have now fledged and are hiding in the undergrowth waiting for their parents to bring food. We see them searching out food on the lawn and the male Blackbird sits on a tall branch to sing a glorious song in the evening.
For the illustration I placed the nest i…
Post a Comment
Read more
More posts